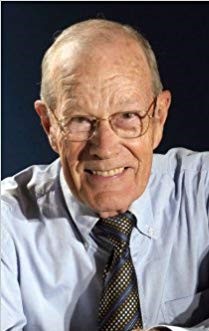 Biography: Loren Tate was the sports editor at both the Champaign News Gazette and Channel 15.  For many years Loren was the person who oversaw the selections for the highly regarded News Gazette all state teams for football and basketball.  His real love was following the University of Illinois teams.  On September 14, 2017 it was announced that Loren (age 86) would retire from writing after nearly a half century of outstanding sports journalism.