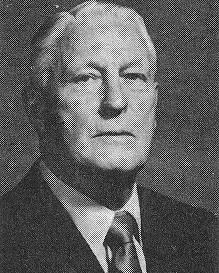 Biography: Ron Gibbs was one of the all time great NFL referees who also had an outstanding career as a basketball official.  He officiated the NAIA Tournament in Kansas City nine times and the NCAA finals three times.  In the late 1930’s he was a state tournament official in Illinois.  For his excellence, he was awarded the Bradley University Certificate of Honor Award in 1971, the Rockne Club Certificate of Merit, was the Official of the Year in 1953 for both football and basketball and was elected to the Minnesota Sports Hall of Fame in 1958.  A graduate of St. Thomas College in St. Paul, MN, Ron spent many years as the Recorder of Deeds in Springfield.  Ron passed away in March, 1985.