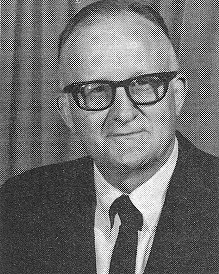 Biography: Claude “Dusty” Rhodes was a player, coach, official, administrator, and fan during his athletic career in Benton, IL.  After a brilliant athletic career at Benton HS and in college, he returned to his home town to teach and coach.  Beginning in 1939 and running for 26 years, he became one of the Midwest’s most respected officials at both the high school and college levels.   Dusty is remembered for his trim physical condition, the way he carried the whistle in the side of his mouth and his colorful manner of calling fouls.  Dusty worked the state tournament three times and was highly honored when he was chosen to work the NCAA playoffs in Chicago.  Shortly before his 1973 induction, Dusty retired from Benton HS. He passed away on January 10, 1979.