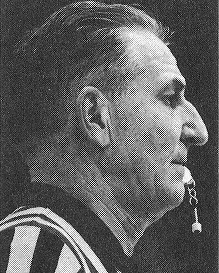 Biography: Paul Sokody was a leading official for nearly 30 years at the high school and collegiate levels.  During this time he won numerous honors as a top official.  Before that, Paul was an outstanding basketball player, graduating from Elgin HS in 1932.  He went on to captain the Marquette University team of 1937, was their leading scorer in 1938 and played pro ball for the Sheboygan Redskins, the Chicago Studebakers, and the Detroit Eagles.  Paul passed away on May 12, 1992.