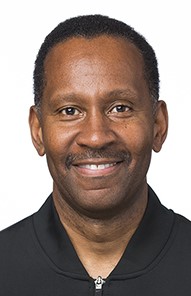 Biography: James Capers, Jr. is the son of former NBA official, James Capers, Sr.  He graduated from (Chicago) Hales Franciscan HS and Northern Illinois University.  After his education, James, Jr. followed in his fathers footsteps by becoming an official in the NBA.  He has been with the NBA for two decades (still short of his dad’s 24 seasons).  He has worked more that 1,100 regular season games.  James also has officiated 67 playoff games, highlighted by three NBA Finals assignments.  In addition to the NBA work, he officiated six years in the CBA, including two CBA All-Star Games.