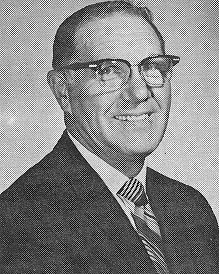 Biography: Alvin D. Gebhardt was one of the best officials to ever work in the state of Illinois.  Alvin officiated for 28 years as an IHSA official working numerous regional and sectional games.  He worked 12 super-sectional games and was 4 times asked to officiate the state finals.  Additionally, Alvin worked the NAIA playoffs 7 times, was a Missouri Valley Conference official for 11 years and officiated the NCAA finals.  He had a tremendous rapport with coaches, players, fans, and his fellow officials. Alvin Gebhardt died on July 10, 2005.