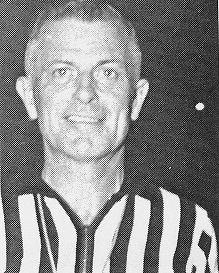 Biography: Harold Inman received $5 and gas expense for officiating two games when he began in 1931.  His illustrious career continued for 34 seasons, ending with the super sectional game in 1965 which featured Chicago Carver vs. Waukegan in Evanston.  This marked the 8th state tournament assignment for the Champaign resident.  Harold refereed approximately 60 games per season.  A rural mail carrier by career, Inman whistled his first regional game in 1934 and his first sectional game in 1938.  From 1937 through 1965, Harold was assigned to both a regional and a sectional.  He estimated that in peak tournament months such as January it wasn’t unusual to drive 1, 200 miles to his referee assignments.