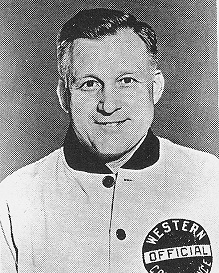 Biography: Carl “Pinoke” Johnson (along with fellow IBCA Hall of Fame inductee Fred Young) was one of two officials through 1975 to be chosen to officiate three consecutive state tournaments in Champaign.  These were the years 1942, 1943, and 1944.  In 1938, Pinoke was named to the Big Ten Conference staff.  In 1950 he officiated the Central American Games.  In 1951, Johnson was part of a milestone crew when he worked the Bradley University Tournament which marked the first time that a three man crew was employed.  Johnson officiated for 22 brilliant seasons through 1953.  Carl passed away on November 11, 1997 at the age of 92.