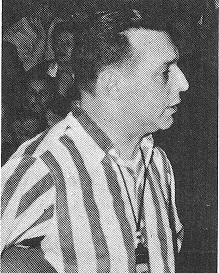 Biography: Ernie Lieberson taught in the Chicago Public Schools for 43 years.  Appointed supervisor of Physical Education in Chicago in 1943, he served the students in this role for 25 years.  He was also in charge of the interscholastic programs for the Chicago schools.  Lieberson was registered as an official on Feb. 2, 1929 and became certified in 1932.  He reined as an on-court referee for 50 years, the last 10 as a rules interpreter.  Ernie worked the state tournament in 1937 and 1938.