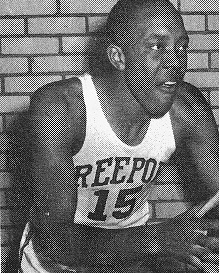 Biography: Deacon Davis led his Freeport HS team to the 1951 State Championship, earning all state player honors for himself.  Deacon then played for the University of Iowa, where he earned All Big 10 honors and was the captain of the Big 10 champion Hawkeyes in 1955.  Deacon played with the Harlem Globetrotters after his collegiate days.  At the time of his induction, he was the Director of Special Programs at Northern Illinois University.  Deacon passed away on March 20, 2003.