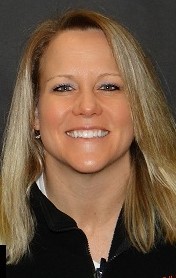 Biography:  Ashley scored 2,129 points in her career at Barrington High School for an 18.8 ppg average..  She also amassed 849 rebounds and 330 steals.  She was named a 1st team all-state selection by the Illinois Basketball Coaches Association, The Champaign News-Gazette, The Chicago Tribune, and The Chicago Sun-Times.  During her senior year she was the Mid-Suburban League Co-Player of the year.  She would play collegiate basketball for the University of Illinois. With Illinois, she helped the squad to its first-ever Big Ten Conference Title, while earning three straight All-Big Ten honors (1996 to 1998).  Her 2,061 career points remains in the top five accomplishments of all time.  During her senior season, she was named the Big Ten Player of the Year and 1st Team All-American.   She was the first women's basketball player to have her jersey retired by Illinois.  After college, she was drafted by the Chicago Condors of the ABL.  Ashley then taught and coached for 4 seasons at Schaumburg High School, leading them to consecutive winning seasons.  An outstanding athlete, Ashley spent several seasons with professional women's football.  She was part of the United States National Team that captured the gold medal at the 2013 IFAF Women's World Football Championships.