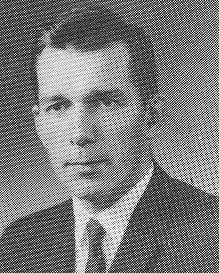 James DeWulf was a three-year starter at both Alleman HS of Rock Island and (Chicago) Loyola University.  During his prep career, James earned all-state player honors as a senior from both the Chicago Daily News and the Champaign News-Gazette.  At the time of his graduation, James held the Alleman record for scoring average (23.4 ppg), points in a season (587), rebounds in a season (504) and rebounds in a game (31).  At Loyola, James served as the Rambler co-captain in 1958.  After spending time as the Rock Island state’s attorney, James completed his career in private practice.  James DeWulf passed away on December 7, 2018.