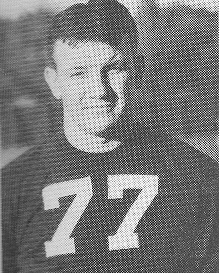 Biography: Tony Blazine was a sophomore regular on the 1929 Johnston City team that defeated Champaign 30-21 in the state championship game held in Huff Gym. His coach was Hall of Famer LaRue Van Meter. After high school Tony attended Illinois Wesleyan where he was a four-year regular, starting in the 1931-32 season. AS a sophomore he was an all conference selection (Little Nineteen) and captained the 1933-34 squad. Although an outstanding basketball player, Tony was best known for his football prowess. He was a Little All-American player, selected by the fans to play in the 1935 College All Star team. He went on to play for the Chicago Cardinals from 1935-40, finishing his career with two years as a member of the New York Giants. After his playing days, Tony coached at Illinois and Washington. Tony Blazine passed away on July 3, 1963.