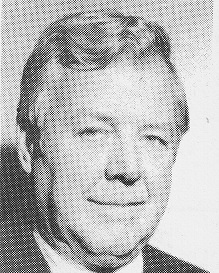 Biography:  Robert Calihan was an All Catholic League selection for (Chicago) St. George HS in 1936 When he was selected the most valuable player in the Loyola Tournament. Robert was the University of Detroit’s first All-American player in 1939-40. A Notre Dame basketball player in 1940 was quoted as saying, “Although we haven’t played U of D yet, we are picking Calihan on the first all-opponent team because we know that he ranks above any other center we have met this season.” Calihan led the Titans in scoring for three seasons. He played professionally with the Detroit Eagles in 1941 and the Chicago Gears 1945-47 and Dow Chemical in 1948. One year he was second only to George Mikan in scoring. He then became the head coach at his Alma Mater and compiled a 303-241 record in 21 seasons, gaining three NIT and an NCAA berths along the way. Spencer Heywood and Dave DeBusschere both played for Calihan who became the athletic director emeritus at Detroit upon his retirement. The athletic administration building which also houses the university’s practice facilities are named after Robert. Robert Calihan passed away on September 22, 1989.