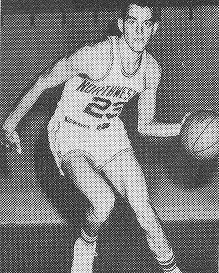 Biography: Bill Gibbs was once called “The fastest gun alive” by Coach Lee Cabutti after Bill scored 20 points in one quarter against Rich East HS. Gibbs played on a Rantoul team which won 32 consecutive games before losing to West Aurora in the 1959 state tournament. Although four other Eagles’ players averaged in double figures, Gibbs averaged nearly 20ppg and was named to every all-state team as a guard. After high school, Bill attended Northwestern University where he was a three-year regular. In his first start as a sophomore, Bill scored 19 points. He also played in the first ever game at the University of Illinois’ new Assembly Hall; he scored 17 points that night. After college, Bill became a guidance counselor at Watseka HS. Bill Gibbs passed away on April 25, 2011.