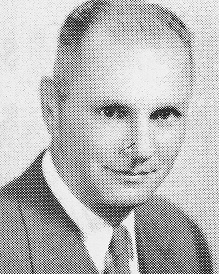 Biography:  Clarence E. Rogers was the captain of his Brownsburg, IN High School team in 1917-18 before attending Bradley University. Under AJ Robertson, Clarence captained the Braves during the 1921-22 and 1922-23 seasons. Clarence was a 4-sport athlete for the Braves also playing football, baseball, and track. He was inducted into the BU Hall of Fame in 1949. The following two seasons after his college graduation, Rogers helped coach his collegiate alma mater to Little 19 Conference Championships. Clarence then moved to Atwood HS where he taught industrial arts and coached basketball from 1926 through 1951. His teams won numerous conference and tournament championships. In 1930, Atwood qualified for the state tournament, before losing to eventual state champion (Peoria) Manual High School in the quarterfinal round. Clarence Rogers passed away at the age of 85 on December 9, 1985.