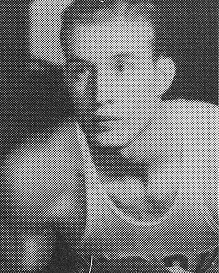 Forrest Sprowl was a member of the Oblong HS team that made the state finals in 1937.  The most valuable player of the Wabash Valley Tournament in 1936, Forrest was named to the all-state team in 1938.  At Oblong, he averaged 13.2 ppg and scored 818.  At Purdue, Sprowl was the team MVP as both a junior and as a senior.  During his senior year at Purdue, Forrest was the Boilermaker Athlete of the Year.  Following a professional career with the Chicago Bruins, Forrest coached at Oblong for a year before moving on to Monticello, Ind.  He also coached at Lawrence College.  After coaching, Forrest worked as a salesman for Fox River Paper Manufacturing.  Forrest Sprowl passed away on October 19, 1988 at the age of 69.