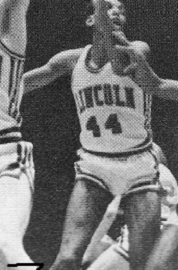 Biography:  Seymour Reed was one of the most complete players ever to graduate from Lincoln High School. The three-year letterman was a two-time All-State player and MVP. He averaged 19.5 ppg and 10 rpg for the Railers. His defensive ability was never forgotten and the Railer defensive award now bears Reed’s name. During his junior season, Seymour led Lincoln to an IHSA Super-sectional berth, losing a one-point contest to state runner-up, (Peoria) Spalding High School in 1969. An All-American player as a high school senior in 1970, Seymour moved on to nearby Bradley University where he continued the same pattern of play. He averaged 18.5 ppg and 8 rpg for the Braves. At Bradley, he was the Missouri Valley Conference Freshman of the Year, Sophomore of the Year and a 3-time all-conference performer. Seymour was the Bradley MVP during his junior and senior seasons. After college, he played internationally in Sweden where he averaged 25.5 ppg and 14 rpg.