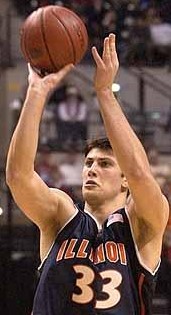 Biography:  Damir scored 1,231 career points and became the all-time leading rebounder with 764 career grabs at (Rockford) Boylan Catholic High School.  He was a 61% field goal shooter and blocked 160 shots for the Titans.  Damir earned a scholarship to the University of Illinois, playing for the Illini from 1998-2002.  He was a starter on Illinois' 2001 NCAA Elite Eight team.  He played professionally for many years and was voted the top European player in France in 2008 and 2010.