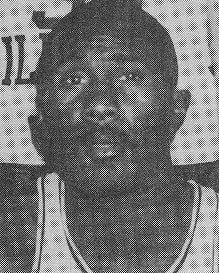 Biography:  Abe Booker's name is always associated with (Chicago) Wells High School athletics. The 6-foot-5, 230-pound Booker was three times an all-state selection and at one time held the Chicago Public League scoring mark. Following high school Abe played three seasons (1959-61) at Northern Illinois University in both football and basketball. As a basketball player his best year for the Huskies was his junior campaign when he scored 316 points (15-point average) and grabbed 331 rebounds. His 32 rebounds against Eastern Michigan on December 17, 1959, set an NIU record. Abe spent a short time as an undrafted free agent with the Baltimore Colts of the NFL and one season with the Chicago Bulls of the UFL. In 2000, Abe was named to the NIU All-Century Team. He was a charter member of the Chicago Public League Coaches Hall of Fame in 1992. Abe passed away on February 3, 2017.