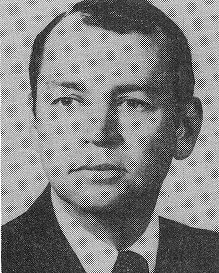 Biography:  After a great playing career at Fenwick High School, Bill Ebben carved a niche for himself in the basketball annals at the University of Detroit. The 6-foot-4 Ebben was named to the all-Missouri Valley Conference team in 1956 and 1957. Those years he was also a Helms Foundation Basketball Hall of Fame All-American. In 1957 Ebben led the Missouri Valley in scoring with a 26.2 average and played in the East-West All-Star game at Madison Square Garden. Overall at Detroit, Ebben scored 1,691 points for a 20.1 average. At the time of his IBCA Hall of Fame induction in 1980, Ebben ranked 8th in the MVC for free throws made in one season - 198. Ebben played with the Detroit Pistons following graduation.