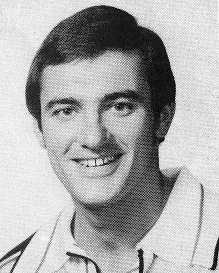 Biography:  Larry Moore set the Quincy High School single season scoring record of 920 points (27.5 avg.) in 1971-72 when the Blue Devils were 28-5 and IHSA state runner-up to (Dolton) Thornridge High School. For that state tournament series, Larry was named to the all-tourney team; he was also named all-state by AP, UPI, the Daily News and the News-Gazette. Along the way Larry was named most valuable in the Quincy Thanksgiving and Pekin Holiday Tournaments. Moore attended Iowa on a scholarship, starting several games before being sidelined with a back injury. Transferring to Quincy College, Larry reunited with his high school coach, Sherrill Hanks (an inductee of the inaugural Hall of Fame Class of 1973). He earned most valuable, all NAIA District 20, and Illinois SID all-state, while scoring 590 points as a collegiate senior averaging 17.7 ppg. Larry led his squad to the NAIA tournament in Kansas City that season. After his playing days, Larry remained in his hometown as a businessman.