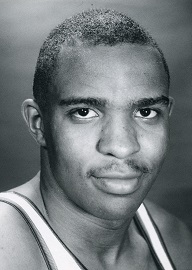 Biography:  George starred at Alton High School before cecoming one of the best players in Illinois State University basketball history.  He averaged 18.6 ppg during his 3-year career with the Redbirds.  During his senior season of 1967-69, George averaged 22.6 ppg.  He led the Redbirds to 4th place in the NCAA College Division national tournament.  He was a 2-time all-conference player and ranked 9th on the ISU career scoring list with 1,470 points.  He was inducted into the ISU Athletic Hall of Fame as an individual and as a member of the 1967-68 team.  After college, he has been employed by Lewis and Clark Community College, became their Vice ­President of Student Life and Coordinator of Affirmative Action/ADA. George was the first African ­American Athletic Director as well as Dean of LCCC.