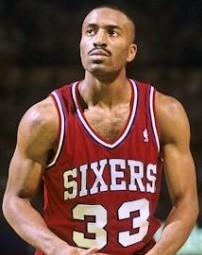 Biography: Hersey starred at Chicago Westinghouse High School and became an All-American at Bradley University. He led the nation with 36.3 points per game as a senior in 1987-88 and was named the College Player of the Year.  Hersey still ranks eighth on the NCAA Division I career scoring list with 3,008 points. He was taken with the sixth pick in the 1988 NBA Draft and finished his 13-year NBA career with a 14.7 scoring average.