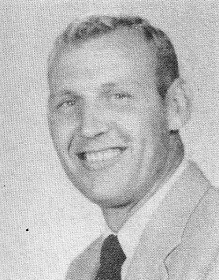 Biography: The originator of the jump shot and reverse layup in Illinois High School Basketball could well have been Roy Gatewood, the terror of the 1943 state tourney as a member of the Salem High School Wildcats. Gatewood stunned players, coaches, and fans with his feats as the Wildcats placed third in the IHSA State tournament. Gatewood bettered two of Dike Eddlemen’s scoring records. In the third-place game, Gatewood scored 29 points against Elgin in a 69 – 58 win to better Eddleman’s 26 the year before. His 96-point total for the tourney also shattered Eddleman’s record of 72. He completely amazed media: Chicago Daily News Writer, Lyall Smith – “Gatewood’s ‘s favorite shots are a high leap and one-handed push shot and his drive under the basket and laying the ball back to ease over the rim shot.” Pat Harmon, Champaign New Gazette sports editor – “I admire Gatewood’s tremendous drive, his nerve, his nobody-can-stop-me-here-I-come attitude in going for the basket.” The 6-3 ½ Gatewood was an all-stater and all-tourney selection in 1943. Gatewood attended the University of Illinois where he earned three basketball letters before graduating. Gatewood coached high school basketball at Fairfield and Mount Carmel. Sadly Roy Gatewood died in 1961.