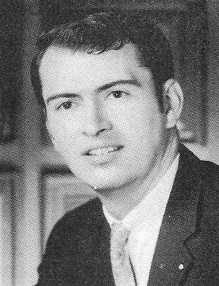 Biography:  More attention was heaped upon Sheldon High School while the 6’6” Trudeau was a three-year starter from 1961-1963 than ever before. Trudeau led the Rams teams to an 81-8 record while scoring 2,089 points for an average of 23.3(Note that there was no 3-point line). During the Trudeau era, Sheldon won two Iroquois Country Tournament Championships, 2 IHSA Districts and 2 IHSA Regionals. Three times the Rams won the Iroquois Conference crown. Twice named all-county, Trudeau was named to the little all-state team in 1962 and the Associated Press’ top 15. As a senior, Trudeau was the third leading scorer in the state with a 29.7 average. Following high school, Trudeau moved to Purdue University, where he was the three-year starter for the Boilermakers and tri-captain in 1965-66. Doug was named to the Big Ten All-Sigma Chi All-American team twice. Trudeau was named third team All-Sigma Chi All-American in1965. Trudeau was the leading vote getter in 1975 when the all-time Iroquois Co. basketball team was named. Doug Trudeau passed away on May 1, 2009.