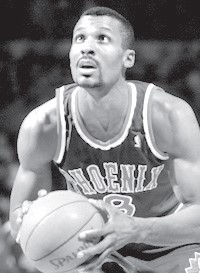 Biography: Eddie followed up a standout career at Chicago Westinghouse High School by starring at the University of Illinois. He averaged 14.0 points per game in his Illini career, famously hitting the game-winning shot against Magic Johnson and
top-ranked Michigan State in 1978-79.  Eddie was selected in the second round of the 1981 NBA Draft, the start of a 17-year career in the league. He averaged 16.0 points per game for his NBA career.  At the time of his induction, Eddie was a basketball television broadcaster.