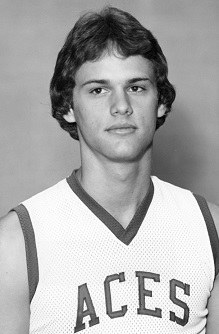 Biography: The entire nation was saddened when the University of Evansville basketball team plane crashed on Dec. 13, 1977, killing 14 players and their coach. Mike Duff, one of the truly great basketball players from Southern Illinois, perished in the crash. Duff started high school at Shawneetown before moving to Eldorado HS from 1975-77. Duff played on three Class A Elite Eight teams and twice was named to the all-tourney team. In 1977 Duff was the state’s lone player to top the 1,000-point mark with 1,087. That gave him a career total of 2,588. He established Eldorado’s mark of most points in one game – 47, highest season average – 32.3, and highest career average – 25.8. He recorded a then record 28 rebounds in a game as part of his record 515 rebounds for the season and 1,088 for his career. His season rebound average of 15.1 and career rebound record of 12.5 set a high standard for Eldorado HS. Twice a consensus all-state player, Duff was a Street & Smith All-American in 1977 and the Player of the Year in Southern Illinois in 1977.  Prior to the crash, Mike had scored 23 points against the Indiana State squad led by Larry Bird.