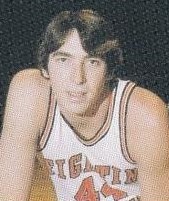 Biography:  Derek Holcomb had an outstanding high school career at Richwoods High School in Peoria where he started for 3 years on the varsity team. Derek was an All-Mid-State Nine player for 3 straight years. He was an All-State and All-American player for the Knights. In his senior year he was chosen to play in the prestigious McDonald’s Capital Classic. In addition, he was chosen to play in the IBCA All-Star game, playing with the “AA” South in 1976. Derek went to Indiana on a scholarship but transferred to the University of Illinois where he played 3 years of varsity basketball. Derek averaged 10 rebounds per game for the University of Illinois, and he set the blocked shots record of 88 in one season and 11 in one game. He was drafted by the Portland Trail Blazers in the NBA draft. Derek played on the pro circuit in Europe, playing with France, and in Israel. After his playing days, Derek turned to teaching at the University of South Florida.