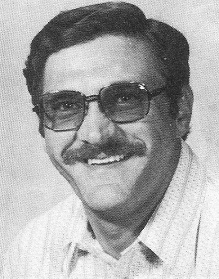 Biography:  Larry Hoover set the career scoring record at Dakota High School. He scored 955 career points and under Coach Ray Polhill, compiled, the second-best record in the school’s history (23-2) in 1960. The 21.0 ppg scorer was named to all-area teams picked by Freeport and Rockford newspapers. Hoover was also all-conference as an end in football and competed in the state track and field meet in the shot-put. His 53’8” shot set a Dakota record. In addition, Hoover was salutatorian of his class and a Merit Scholar. Larry Hoover attended NIU on a track scholarship and at one time held the Huskies’ shot-put record. A “walk-on”, he played four years of NIU basketball. As a junior, the 6-3, 215 pound Hoover scored 18 points and grabbed 24 rebounds against Mankato State. He averaged 10.1 points for 74 varsity games. He was the team’s MVP as a junior and the team captain as a senior. In 74 games, Hoover averaged nearly 9 rebounds per game.  Intense competitive desire and great skills made Hoover one of the best small forwards to play basketball in Illinois.