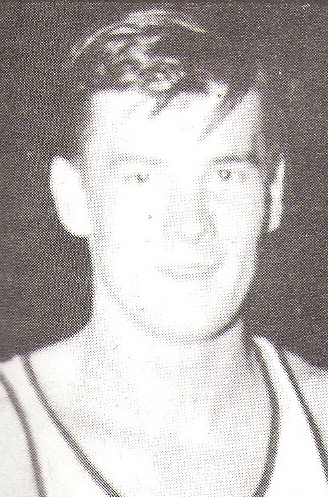 Biography: John “Dick” Williams was a three-year letterman a Kirkland High School where he served as captain and was named most valuable player. He was named all-conference three years. At Northern Illinois University, Williams was the last athlete to win four letters in one academic year (1944-45). His athletic career was interrupted by WWII.  John served in the US Army from 1945-47.  Williams won three letters in basketball and captained teams which won Illinois Intercollegiate Athletic Conference titles. He contributed to IIAC championship teams in four sports (football in 1944, basketball in 1944-45, track in 1945, 1948, and 1949, and baseball in 1945).  In basketball, he led the IIAC in scoring and was named most valuable player. Dick accomplished what was considered almost impossible by competing in two collegiate spring sports literally at same time. He would throw javelin or attempt pole vault, dress in his baseball uniform between innings or at-bats (when respective track-baseball facilities were adjacent to each other on east campus). These efforts were rewarded with professional tryouts with MLB Chicago White Sox (1945) and NIBL Fort Wayne (IN) Zollner Pistons (1949).  He played with the Mount Morris Gable Colts while they won three Illinois AAU championships. Williams was inducted into the Northern Illinois University Hall of Fame in 1983.  John began his teaching career in 1951 and worked at Genoa, Kirkland, and Rockford Jefferson High Schools.