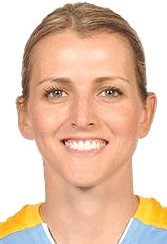 Biography:  Allie was an All-American in basketball and volleyball and All-Area in softball at Joliet Catholic Academy. She scored 2,348 points as a four-year starter in basketball and was an All-American as a senior in 2004, averaging 26 points, 10 rebounds and 3.7 assists.  Allie then starred at DePaul University, scoring more than 2,000 points. She was drafted by the WNBA’s Seattle Storm and is a three-time WNBA All-Star, playing for the Chicago Sky. She also played professionally in Hungary.