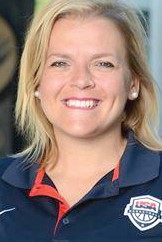 Biography: As a senior at Joliet Catholic in 2006, Samantha was the Chicago Sun-Times Female Athlete of the Year after starring in basketball, volleyball and softball for JCA. She was a two-time IBCA first-team all-stater in basketball, totaling 1,910 career points.  She went on to score 1,273 career points at DePaul and her 484 career assists ranked third in school history. A two-time all-Big East selection, she became head coach at Saint Francis and an assistant at Lewis, before becoming the Flyer’s head coach. She also has been an assistant coach with USA Basketball.