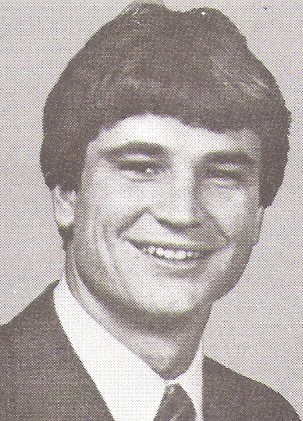 Biography:  Rich Fetter scored 2,569 points in four seasons at Riverton High School and became the immediate Springfield area all-time leading scorer (note that there was no 3-point line in the rules at this time). During his final three seasons at Riverton, Fetter was named most valuable player. As a junior and senior he was named to the all-state teams. Riverton and Fetter placed fourth in the 1979 IHSA Class A State Tournament. Fetter was the tourney’s leading scorer and rebounder in that tournament. Fetter as a 6’ 8” senior, averaged 27 points. Previous seasons saw averages of 14.4, 23.3, and 26.4. Fetter set Riverton School Records for: most point’s game (46), most rebounds game (24), blocked shots game (15), season points (865), career points (2,569), season rebounds (410), and career rebounds (1,215). Fetter’s No. 44 jersey has been retired at Riverton. Fetter played four seasons at Penn State where he scored in double figure 51 times in 100 games played, had three double figure rebound games, and three double-double games. Fetter averaged 9.9 points at Penn State and 3.8 rebounds. He was credited with 200 assists and 67 steals. Fetter had 29 points as a junior against South Carolina in 1982 and 24 points against Syracuse as a freshman.