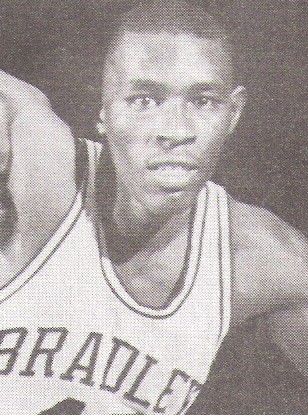 Biography:  Eddie Jackson established himself as a standout basketball player from 1958 to 1960 by scoring 923 points in his career at Peoria Manual. Jackson went on to Bradley University where he was a 3-year starter. He played on two clubs which played in the National Invitation Tournament. Jackson was named all-Missouri Valley Conference during the 1964-65 season when he scored 465 points and pulled down 227 rebounds. Jackson had 225 rebounds and 363 points as a sophomore and 205 rebounds and 345 points as a senior. In his Bradley career scoring of 1,176 total points gave him a 14.3 average which placed him 16th on the all-time Bradley scoring list at the time of his induction.