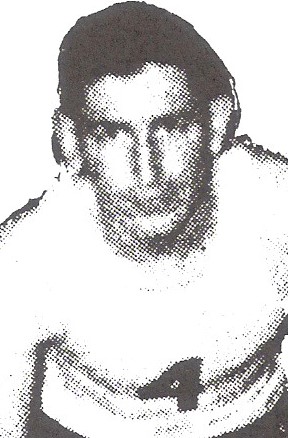 Biography: The late Frank LaPorte Jr., built a fabulous basketball career at Chicago’s Gage Park High School and St. Mary’s College in California. He led the Gage Park junior team to the school’s first championship and was a three-year starter and leading scorer. Gage Park finished second in the University of Chicago Christmas Tournament, which included 32 schools, in 1944-45 and third in 1946-47. Twice he was named to the all-tourney team and was chosen as its best ballhandler.  LaPorte earned all-section honors in 1943-44 and 1944-45 and all-Chicago Public League in 1945. He was the first sophomore to make all-section. Before his senior year he was drafted, and when he returned 18 months later, he was able to play for the senior team only until he turned 20 years old. Gage Park went 14-2 before losing its leading scorer. LaPorte was the first player in school history to score 1,000 career points and was chosen Gage Park’s Basketball King for the 1946-47 season. LaPorte played with Chicago Public League greats such as Jake Fendley, Nick Kladis, Joe Graboski and Bato Govedarica. Despite only playing half the season, LaPorte was named Chicago Sun-Times Player of the Year in 1947. LaPorte received a scholarship to Iowa but dropped out of school after four weeks. He was recruited by St. Mary’s and was a starter for two seasons, missing his junior year because of injury, but returning to play again as a senior. LaPorte played on five CYO championship teams with Santa Maria Incoronata and was a five-time all-star. In 1949, Santa Maria won the St. Sabina Invitational Tournament (52 teams) and LaPorte was named MVP. He later coached basketball and taught history for 38 years at Bishop O’Dowd High School in Oakland, California and compiled a 894-316 record.  We at the IBCA do not know details of Frank’s passing.  If a reader has more information please reach out to us through the web site.