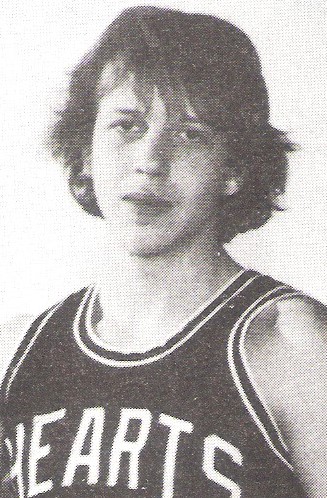 Biography:  Mitch Arnold of Effingham High School set the state tournament scoring record at 115 points in 1980.  He was the only unanimous AP and UPI All Tournament selection even though the Flaming Hearts dropped the IHSA state title game to (Chicago) Manley High School 69-62.  Effingham finished the season with a 30-2 record.  In the IBCA All Star game that summer, Mitch was selected as the AA South MVP.  For his prep career, he scored 1,067 points.  He ws the Mid-State Conference's leading scorer in 1979 and 1980.  He earned All-Conference honors 3 times, twice as the league MVP.  3 times he was named to the Salem and Heartland Classic all-tournament teams, was the Heartland MVP twice.  His high game at Effingham was 51 points.  He went on to star for Fresno State University from 1982-85.  He also scored a career mark of 1,067 points there.  He set the career assist record at 420.  He earned MVP, best defensive player, and top scorer honors during his collegiate career.  Twice he was named to the Pacific Coast Athletic Association first team.  As a junior, he led Fresno State to the NIT championship while earning tournament MVP honors.  Mitch was drafted by the Golden State Warriors of the NBA.