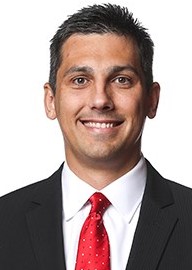 Biography: Rhet was a sophomore starter on a 33-1 Farmington High School team that placed 3rd in the IHSA Class A tournament in 1998.  He earned 1st team all-state player honors as a senior when he averaged 22 ppg, 6 rpg, 5 apg and 3 steals/game.  Rhet excelled in the classroom as well, finishing his prep career as the valedictorian of his class.  Rhet was a 2-year captain and Male Scholar Athlete of the Year at Austin Peay State University in 2003 and 2004.  He was a 3-year starter and helped the Governors to the 2003 NCAA tournament and the 2004 NIT.  Rhet followed his dad (Tom, IBCA HOF Coach in 2001) into the coaching ranks working on the women’s staffs at The University of Maryland and Indiana University. Rhet also joins his brother Ben as players inducted into the class of 2010.