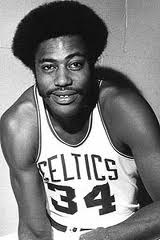 Jim Ard was one of the best big men ever developed in Illinois.  In 1966 he led Thornton of Harvey to the State Championship with his outstanding all-around play.  A superior defensive player and rebounder, Jimmie still managed to average 20 points per game.  He went to Cincinnati University where he starred for three years and led the Bearcats to several titles.  Jim went on to play in the NBA for the Nets, Celtics and Bulls.  He is best known for his play with the Celtics.   Ard sank the go-ahead free throws in game five of the 1976 NBA Finals, a triple-overtime affair between the Celtics and the Phoenix Suns. These free throws have been described as "the two most historic free throws in both Celtics and NBA history.” The Celtics went on to win that series for the 1976 NBA championship.