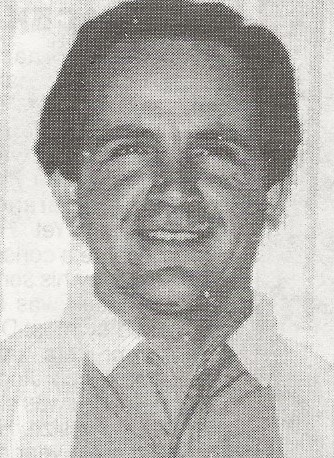 Biography:  Glen Mudge was a 6' 3"  jumping jack they called “Farmer” at LaSalle-Peru High School. He is remembered for chasing a dream needlessly on one leg at the close of his senior year. Late in the year, he injured an ankle against Spring Valley Hall. It was thought Mudge needed 55 points to become the Cavaliers’ all-time leading scorer. In actuality Mudge had become the leading scorer the week before injuring his ankle. Mudge slowly worked back into shape with games of 9, 3, 18 and 12 points before traveling to Kingman Gymnasium for a match with state rated Ottawa. L-P dropped a 71-70 game to the Pirates, but Mudge, with a heavily taped ankle, closed out his prep career with 18 points. A teary-eyes Ottawa coach, Dean Riley, then displayed a true gesture of character by going to the Cavaliers’ dressing room and presenting Mudge with the game ball for his heroic effort. Mudge, undisputedly one of the most exciting players in L-P basketball lore with his slam dunks and high-flying rebounds, totaled a career mark of 1,392 points from 1974-77. Mudge was named most valuable player in Illinois State Classic, set a tourney scoring mark of 94 points and was named All-State by the Associated Press. He later played two years for Illinois Valley Community College.