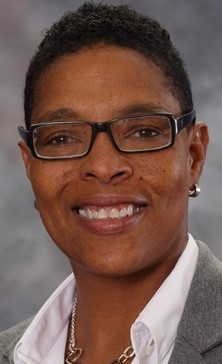 Biography:  Cathy Boswell gave Illinois high school girls’ basketball a huge boost in 1977 and 1978. As a 5’ 7” freshman, Boswell led Joliet West to the first girls IHSA State Tournament where they lost in the quarterfinals 56-47. Boswell was named the all-tournament team. As a sophomore Boswell, now a 5’ 9” forward, brought Joliet West storming to the Assembly Hall. She established a championship game scoring mark of 26 points and totaled 67 for the tournament. Joliet West defeated Lincoln 64-48 in the title game and Boswell was named all-tourney and all-state. Then Boswell surprised college recruiters around the country by graduating early and announcing she would attend Illinois State University. She was ISU’s leading scorer and rebounding as a freshman. Statistically, Boswell’s sophomore year was her best. The Redbirds finished 28-8 and were ranked 15th nationally. Boswell set six school records and averaged 18 ppg. She was named most valuable at IAIW and MAIAW championships and was second in the nation in free throw accuracy. Despite a broken ankle midway through her junior year, Boswell led the team in scoring (22 games) at 16.2 ppg and rebounding at 7.2 rpg. As a senior Boswell and ISU made their first appearances in the NCAA Tournament after winning the Gateway Conference title. Boswell also became the 1st 2,000-point women’s scorer at ISU. She was named to numerous honor teams, capped by the 1984 Olympic squad where she helped lead the USA squad to the gold medal.  Cathy played professional basketball for 24 seasons, mostly overseas.  Boswell is a three-time hall of fame inductee, including Joliet West High School, Missouri Valley Conference and Illinois State Athletics Percy Family Hall of Fame. Her ISU number is retired and hanging in the rafters of Redbird Arena.