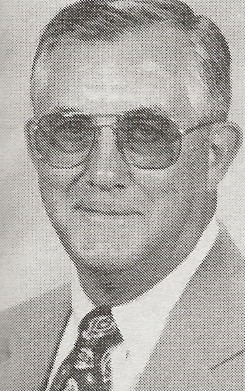 Biography:  Gery Maury was a three-year starter at Rantoul from 1951-52 through 1953-54. When Maury graduated he had totaled 1,251 points and held the school’s career scoring record until 1992. Those who saw him play claim he would still be the Eagles’ scoring leader if he played in the days of the 3-point field goal.  As a sophomore, Maury averaged 11.2 points, with a high of 24, and was an all-Wauseca Conference selection at forward as the Eagles won the Onarga regional. In his junior year, Maury averaged 15.1, had a high of 31, and the Eagles were Champaign County and Rantoul regional champions. The team finished 23-6 as Maury again was all-Wauseca and named to the Urbana Courier East Central All-Star team.  Maury closed out his prep career with a 27.4 average. Maury’s senior team won its first 19 games and finished 26-4 as Champaign County and Wauseca Conference champions. He was the Eagles’ Most Valuable Player, the top vote-getter on the all-Wauseca Conference team and a member of the all-area and Urbana Courier East Central All-Stars.  Maury was an all-around athlete who won 11 letters in basketball, football and baseball. He was elected to the Rantoul Hall of Fame in 1987.