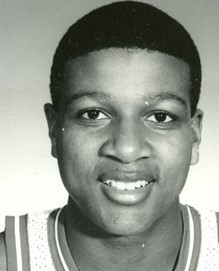 Biography: Tony Freeman was considered by legendary coach Gene Pingatore to be one of the most talented players at St. Joseph after Isiah Thomas. Freeman was one of the few four-year lettermen in program history.  In 1983, Freeman came off the bench as the third guard on a 26-5 team that won the East Suburban Catholic Conference championship and made the Elite Eight. As a sophomore starter, he helped the undersized Chargers to an ESCC title and fourth-place finish in the Class AA state finals. Freeman and the Chargers repeated as ESCC champions and won 20 games in his junior year.  As a senior, Freeman and the Chargers won 29 games, went undefeated in the ESCC, took third at the prestigious Proviso West Holiday Tournament and made it to the Elite Eight. Freeman was a consensus all-state selection and finished his career with 1,563 points and a 12.8 average. His teams had a 101-21 record as he shot 46 percent from the field and 73.8 percent from the line and had 461 assists and 291 steals in his career.  Three times Freeman was named all-ESCC. He was all-tourney at Proviso West in 1985 and second-team Chicago Tribune all-state in 1986. He was his team’s co-MVP as a junior and senior.  Freeman was part of Indiana’s 1987 NCAA championship team as a freshman before transferring to UIC as a sophomore to finish his college career.