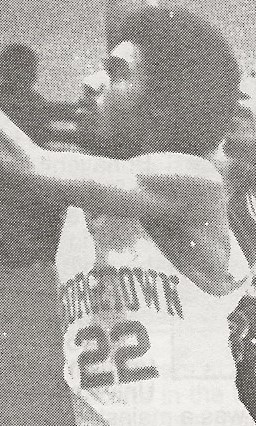 Biography: Derrick Jackson distinguished himself as a three-year starter at Wheaton Central and Georgetown.   At Wheaton Central, Jackson was named all-Upstate Eight Conference as a junior and senior. Jackson averaged 17 ppg as a junior and 23 ppg and 10 rpg as a senior. The all-state pick in baseball was also drafted by the Texas Rangers out of high school.  Jackson chose to attend Georgetown University and play for the legendary John Thompson. As a freshman in 1975 he helped the Hoyas end a 32-year NCAA tournament drought. As a senior, he became the Hoyas all-time leading scorer and ranked seventh on the school’s career list at the time of his induction. He is still the school leader in free-throw percentage at 89%.  Jackson and the legendary Patrick Ewing are two of only three Georgetown players to be chosen team MVP three times. Jackson was also the first modern-era basketball player to be inducted in the Georgetown Athletic Hall of Fame in 1994.  He was invited to the Olympic Trials in 1976 and the World Game Trials in 1978. He was selected by the Golden State Warriors in the 1978 NBA draft.