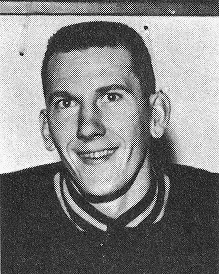 In 1952 Paul Judson received all-state honors while playing for Hebron HS.  He also led his team to the 1952 state title.  Hebron is the only district school to win a title in the one class tournament system.  He moved on to the University of Illinois where he was a starting guard for 3 seasons, earning all Big 10 honors for two of the seasons.  In 1956 Paul was an All-American player who represented the USA in the Olympic games.