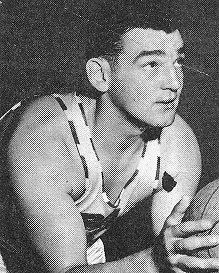 Bato Govedarica has been described as one of the best guards to ever play in Chicago.  The coaches of his era believe that he was 15 years ahead of the game.  Bato was an innovator of the jump shot to go with his set shot and daring drives to the basket.  In addition to his scoring he was a brilliant assist man.  At Lane Tech HS he was an all-state player who averaged 24.5 points per game for his career.  He went on to become an All-American player at DePaul University and played with the Syracuse Nationals of the NBA.  He was the first NBA player of Serbian descent.  Bato passed away on March 13, 2006.