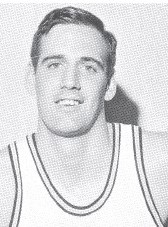 Kendall was a standout at Dupo High School before becoming all-Southwestern Conference performer at Rice University in 1963 and 1964. He was the first player inducted into the Rice Hall of Fame.  Kendall went on to be an AAU All-American and played on the 1967 Pan-Am Games championship team. He was an eighth-round draft pick of the St. Louis Hawks and played for the ABA’s Kentucky Colonels and Houston Mavericks.