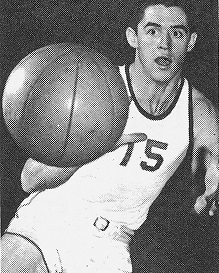 Biography:    After an outstanding high school career at Stewardson HS, Scott Steagall led the Millikin basketball team in scoring in each of his four years in Decatur.  At the time of his induction (1973) Scott held 17 Millikin scoring records and 12 CCIW records.  His senior year he led the nation in scoring and assists of all colleges and universities.  He was selected as the Helms Foundation Minor College Player of the Year in 1951 and named on various All American teams including those sponsored by UPI and the Sporting News.  He was an NAIA Tournament All Star selection as the MVP of the NAIA national tournament in 1951.  Scott was voted into the NAIA Hall of Fame and played for the Phillips 66 Oilers professional team.  Scott Steagall passed away on September 16, 2001.