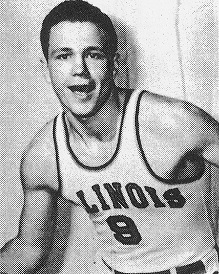 Biography: Don Sunderlage played his high school basketball at Elgin HS where he was an All-State selection and the Big Eight scoring champ in 1947 totaling 359 points in 21 games and was the high scorer for the North in the 1947 North-South All Star game.  Don went on to play at the University of Illinois where he was team captain in 1951, won the Ralph Woods Memorial Free Throw trophy in 1950, was an All-American player in 1951 and was the first Illinois player to score more than 400 points in a season (471 in 1951).  He played professionally as a guard for the Milwaukee Hawks and the Minneapolis Lakers.  Sadly, Don died as the result of a car accident at the age of 31; July 15, 1961.