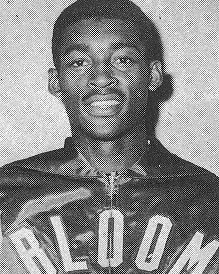 Biography: Homer Thurman is still considered as one of the greatest all around athletes in the history of Bloom HS.  Homer set nearly all of Bloom’s basketball records while he was in school.  He was on the varsity for four years and led his team into the state tournament twice.  Homer was also the Illinois State High Jump Champion as well as a member of the state champion mile relay team.  In football, he was an all area defensive safety.  At the time of his induction in 1973, Homer was thought to be living in California.  Homer Thurman died on June 27, 2002 at the age of 72.